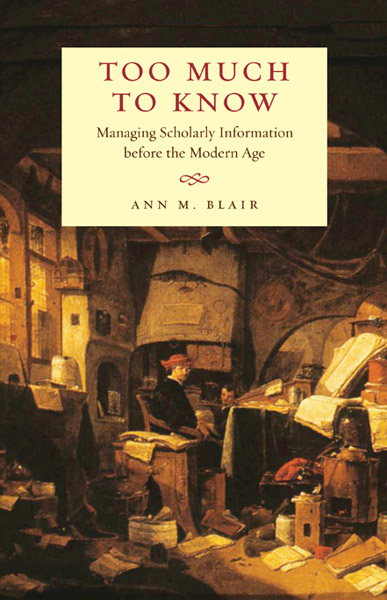 a response to “Information Overload, Past and Present” by Dan Cohen, Executive Director of Digital Public Library of America (December 22, 2013)

As I see it, we inherently live amid many “streams” — moving amid our physical environment, the flows in a workplace, the flow of what’s published, social media, time itself. Likewise, we’re always, to take Blair’s terms, “storing, sorting, selecting, and summarizing,” in a multitude of ways: from how our perception and memory works, to many ad-hoc means such bookpiles, shelves, notebooks, post-its, bookmarks, etc.

It’s a question of how well and happily we can do this navigation and minding. If we are too much in the stream, we experience overload and dissolution. On the other hand, if we retreat to existing acquaintances and interests, we risk being contained by habitual thinking and homophily.

Building on Blair’s terms, and incorporating ideas of “stream” and “flow”, I suggest the design pattern of a ‘distillery‘. Multiple incoming streams (eg water, grain, yeast, heat) come together in an ongoing process of refinement, becoming much more valuable and consumable (& ‘containable’ in a bottle!). I explore this model, and how I currently implement it for myself with various digital tools, at “From reading drift to reading flow.”

As to finding discussion, we might take the present topic and blog post as an example and ask, what might we do right now, to maximize the possibility of deep and meaningful conversation around this important topic?

First, I’d suggest always asking, where IS the conversation? and joining it, or learning from why it’s there. Most material everywhere, whether blog posts or peer-reviewed articles, has no visible discussion around it; most of the conversation, as Bill Joy said of the smartest people, is somewhere else. (see: Joy’s Law). In this case, while after one day there was only one comment posted on your site, I saw many tweets about the post.

So, suggestion #1: gather the Twitter conversation — which I believe is often now the most promising way to convene discussion. I’ve been experimenting with this for some time on my sites, and now use the commenting network LiveFyre to automatically display threaded Twitter comments related to posts. See for example this recent post “What Urban Planning Hasn’t Learned from Tech” on which 60 Twitter comments gathered in a few days, helpfully connecting me to various discussants I wouldn’t otherwise have known about.

It might be objected that Twitter comments are a) too short, and b) susceptible to abuse. On a), I’d note that a comment can be spread across multiple tweets, threaded together e.g. by Twitter’s “Reply” function and/or LiveFyre-style threading. Also, a site can support longer-form comments via Twitter login, for commenters who’d like it.

On b) I think Twitter accounts could actually provide quite good safeguards against spam and abuse, because they can be used as a trust metric. For example, the comment-integration design could be configurable to include only accounts of a minimum age, number of followers, follow/follower ratio; or only accounts you follow, or ones you haven’t blocked, ones that are within N steps on your Twitter network graph, etc.

A second suggestion for building deeper discussion: iterative group curation, i.e. let participants in the conversation collectively locate and suggest best things to read around the topic at hand. This is partly like crowd-curation mechanisms in the Slashdot or Reddit tradition, except that the purpose is to build not an ever-changing front page of topics, but a stable and well-considered ‘container’ for “the best that is known and thought in the world” around a given topic. The “Hacking the Academy” project was one approach to this, relatively large-scale, planned, and centrally edited; I’m thinking also about more frequent, ad-hoc, and transparently/self-curated collections, which anyone could set up on the fly as a discussion emerges.

One way this crowd-curating around topics might be done is by adapting request/idea-management systems like UserVoice or IdeaScale. (the latter was used to gather ideas for the One Week One Tool Digital Humanities project this year).

An example such forum using UserVoice, set up to gather the debate over American Historical Association’s dissertation embargo policy, can be seen at http://collections.conversary.com/.

Distillation and group curation are two of many possible ways we can remain open yet find containment and focus, without closing our circles or just dreaming of an imaginary time before the flood.

One thought on “Information Overload, Containment, and Distillation”