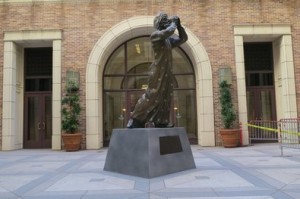 “the taster” outside shuttered cafe in Hills Plaza, San Francisco.

(a response to “What Tech Hasn’t Learned from Urban Planning” by Allison Arieff, The New York Times, December 13, 2013. Note, you should read that article before reading this, it will make more sense that way).

I appreciate and share Arieff’s concerns about the failings of tech and community in San Francisco. I work in tech, love San Francisco and the Bay Area, and want all to thrive.

Since Arieff has eloquently presented what we might call a classically urbanist view, in the interest of experiment I’d like to suggest a complementary view, which perhaps we could call “tech urbanist,” or “soft city.” So hypothetically, humbly, and hoping not to invoke the furies of culture/class war, let’s consider a parallel text to the original, or…

Cities are scrambling to move into tech — we have a Mayors Office of Civic Innovation, open government data platforms everywhere, ferocious competition for tech talent and companies — and they are counting on it for a huge part of their economic future.

But they might as well have stayed in their council chambers, for all the fundamental questioning they’re really doing about urbanism. The oft-referred-to fluidity and reinvention that supposedly drives innovation tends to happen “outside the walls”: among, say, remixers of the “open data,” or volunteers at the civic hackathons.

Meanwhile, the whole structure of government, the tax system, land-use controls and the planning process, etc. continues on. Mostly the same people keep the same secure positions, perhaps adding some new ones to head up the innovation and efficiency efforts. Which is weird.

There’s been no shortage of published laments on the changing nature of San Francisco over the past several weeks, so I’m loath to add another complaint to the list. And yet …
I keep coming across instances where the city & urbanists flock to tech, and talk of innovation yet isolate themselves from the truly disruptive experiences they presumably couldn’t wait to be a part of.

The other week, for example, I made another round of efforts to engage some of the members of the San Francisco Board of Supervisors with ideas and a proposal for prototyping new housing types and zoning innovations. Again, none of them responded  or engaged in any way, and I get told that if I’m not a current resident in a supervisor’s district, I should not expect their participation, but that nothing is likely to get done with a supervisor’s help.

Or, I often come up to San Francisco from Palo Alto where I live, usually via Caltrain, and I walk around while trying to find the hackathon. In doing so, it often strikes me that, while the city talks of a housing crisis and an inescapable natural shortage of land to build, I see literally square miles of desolate, long-unused space around the train yards and south end of the city. I would happily homestead that land, engage in community reclamation and building and whatever other type of sweat equity and innovation that might allow me a foothold to move myself and business to the city. But I’m told it is really inconceivable, that these things don’t change, it would be a 20-year process involving the full community process, etc. Basically, forget it, Jake, It’s San Francisco.

So I’m hearing these good ideas like “civic innovation” and “open government,” and of course want those things to happen. But while the terms are used, I actually don’t see much happening regarding key structural matters of the city that matter most to me, such as housing, or having some voice though only a prospective/future resident rather than a current one.

Now if you walk around a typical block in the city, you likely won’t see any particular civic innovation project popping out, but what you do see emerging is extraordinary gains in rent and property value: an enormous boon for the powerful interests already in place. Tech may be a fulcrum of innovation, but its primary impact for large portions of the city’s population is to drive up their property values, a precisely non-disruptive, non-innovative, and inequitable outcome.

The city and its urbanists’ embrace of technology lingua franca, and their apparent enthusiasm to engage with tech is awesome. But those folks need to become better technologists.

Some are. For example, I’ve been impressed by Jay Nath and other members of the Mayor’s Office of Civic Innovation, who I think are genuinely open to creative change, and making things happen. Also, Forest City doing 5M, as you cite, or SFpark starting to look at market pricing rather than the currently prevalent private taking of public space for vehicle storage, a mockery of ‘community.’

But urbanists and planners, if you really want to embrace technology and innovation, I’d suggest thinking of it not just as matters of civic enhancement — smart apps, parklets, etc. — but as being willing to radically reinvision every structure, norm, and practice that makes up our place. It means extending from local place-making to an infinite frontier of discovery and reinvention; letting no incumbent interest or assumption be sacrosanct or able to escape challenge and alternative proposal, and experimenting and iterating and letting the better outcome win. It means letting proposals be heard and tried, and a hundred flowers bloom, not just a few flowers that the ‘community’ and the ‘stakeholders’ consider within the circle of plausibility.

Just to throw out a couple frame-breakers, some of which I’ve discussed with Arieff before, I think we should be considering fundamental changes and possibilities, such as:

Total openness to innovation and tech means imagining anything, imagining all that is solid melting into air, or at least into the ‘soft city.’ Question the gates, question the gatekeepers. As Whitman said: “Unscrew the locks from the doors ! Unscrew the doors themselves from their jambs!” This city was created once — around the same time Whitman wrote those words — and it can and will be created again.

—–
What do you think? Comments are welcome below, or by Twitter or email: tmccormick at gmail.com. Hashtags: #techurbanism, #smartcity

108 thoughts on “What Urban Planning Hasn’t Learned From Tech”