I. Collaborative Advocacy
In a March 30 post “Is the definition of Open Access closed?” I discussed a concept of “collaborative advocacy“:

try to bring together advocates [around some issue] who don’t necessarily agree, and collaborate for optimally engaged, evidenced, clarified expressions of their respective positions.

The immediate prompt was the, complex, often contentious debate over “open access”, i.e. free public accessibility and reusability of scholarly work. In particular, the tensions between open-science advocates and conventional academic publishers, and between advocates coming from science vs. from humanities.

Possibly, such a forum/argumentation design could encourage credibility being based on clear, easily-accessible and verified evidence of deep, good-will engagement with counter-argument and diverse views. Which is, you know, not always what happens in the rich human tapestry of discussion. And which would be, arguably, a format expressing in situ the structure which the scholarly or scientific worlds purport to have as a whole.

This has some potential advantages not only for audiences, but for advocates themselves, who often have to continually restate nearly the same arguments in many forums, with comparatively little time to fine-tune or correct their statements. This way, they can get arguments as right as possible in one place, and reference it from other contexts.

In scholarly publishing terms, this is something like the contrast between the “article”, or individual exposition model, vs. the “topic page” as represented by Wikipedia and scholarly reference works. Except it would not be single point of view, and particular arguments would be attributable to particular contributors. (possibly close to a Wikipedia-style overview page that has broken a topic/issue into sub-, variant, and conflicting views with their own pages).

To me, the debates over Open Access are an intriguing case study: a highly complex and contested issue (“wicked problem”) that cuts across and involves all areas of science and scholarship, as well as political and commercial sectors. How do people from scientific and scholarly backgrounds engage in this — do their practices and habits of communication serve, or hinder, or need to be adapted?

Also, questions of managing argumentation link together a number of current key problems: how might/should peer review evolve?; how to design commenting systems for the scholarly and general Web? how to catalyze innovative collaboration and counteract homophily?
.

Clearly (or arguably?), these questions are part of fundamental issues about how truth or wisdom and accord may be found, reconciling inquiry and dialog and civility. There are many possible contexts to consider this within: e.g. philosophical inquiry/logic from Socratic dialogue on; the history of scholarly/scientific communication; current explorations of commenting and annotation systems for the Web; or the current, Semantic Web-related, computational analysis of argument structures & data. 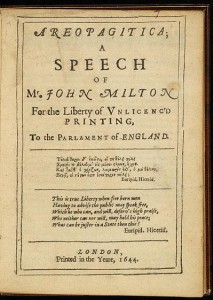 However, I’d suggest as a powerful and useful reference point John Milton’s Areopagitica of 1644, perhaps the most foundational statement supporting freedom of the press, written just 20 years before the first scientific journals were published in 1665. Milton allegorized inquiry as an open field, a battlefield, for doctrines (as expressed by free individual voices) to contend  and truth to win out:

Though all the winds of doctrine were let loose to play upon the earth, so Truth be in the field…Let her and Falsehood grapple; who ever knew Truth put to the worse, in a free and open encounter?

We can easily recognize many latter-day descendant ideas: for example, the “marketplace of ideas” (William O. Douglas, 1953; echoing Oliver Wendell Holmes’ “”free trade in ideas  [within] the competition of the market,”1919). Or the so-called “antagonistic” model Anglo-Saxon legal system — or the typical forms of academic and political discussion. It’s fully independent, monologic voices “in a free and open encounter.” 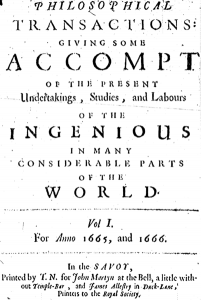 title page of 1st issue of the Philosophical Transactions, 1665.

But how well does that really work? Could it be, to some extent, an artifact of early-modern European print culture that’s been reified as a indisputable model? Do digital-era practices/tools address its  limitations, or might they point to alternate models?

The oppositional tradition and practice in academia is examined and found wanting by Deborah Tannen in “”Agonism in academic discourse,” Journal of Pragmatics, 2002. (DOI; PDF):

understanding, knowledge, and insight come not only from oppositional debate but also from exploring complexity, culling insight from disparate sources, seeking connections—and…these types of inquiry are discouraged by our agonistic ideology and conventions. [2]

how much more might be learned if we think of theory not as static structures to be demolished or assertions to be falsified, but a set of understandings to be questioned and shaped. In this spirit, we could replace the traditional battle and sports imagery with a metaphor from cooking. Daly (1996: xv)’s ‘‘theories should be treated like bread dough that rises with a synergetic mix of ingredients only to be pounded down with the addition of new ingredients and human energy’’.

We might also consider this issue from a quantitative or attention economy point of view. In the time of Milton, or the early Philosophical Transactions, it may have seemed the printing press had let loose an anarchy of expression. However, the set of people who might print a newspaper or pamphlet, or pen a significant article, was still quite small, and a gentleman might, within a few-mile stroll of then-tiny central London’s key coffeehouses and salons, and perusal of their periodicals, survey many fields of discussion.

I wonder, is Milton’s space of doctrinal contention a print-era artifact: implicitly conceiving a “field” that’s bounded by the finitude of print and pre-modern attentional economy, but increasingly insufficient for our comparatively unbounded informational world?

Now, we do have various mechanisms to re-bound the anarchy of expression: for example, topic pages, Wikipedia, bibliographies, reference works, summary reports, literature reviews, citation analysis (who cited this), etc. Editors and producers of magazines, journals, or news shows may play the role of surveying topical fields and bringing disparate views into engagement, ideally.

However, I’d observe that the prevailing norm, still, is that we encounter individual voices, expressed in contention with, and independence from, other voices, which it is our task to evaluate and relate to other claims. Most discussions, even in many of the most prestigious forums and publications, are shot through with recognizable fallacies of argument, particularly straw-man creation and mischaracterization of other views. Perhaps the media environment is much less London coffeehouse, and much more, in Arnold’s words, “a darkling plain, swept with confused alarms of struggle and flight.”

How might we do better? When we are constantly encountering these independent voices in contentious “free and open encounter,” how well can we actually relate and evaluate them? Of course, the goal of most “voices” — news sources, media products, people — is to get more of your time, attention, and/or money, not to enlighten you. But let’s say you want to be more enlightened, or you work in one of the fringe areas like education or research where in some sense this is the goal? Perhaps a key goal for publication/communication design should be better structures to map and relate arguments, not just present them.

Deliberate structures to articulate and relate arguments can also be built into writing and research. For example, the Nobel Prize-winning behavioral psychologist Daniel Kahneman and collaborators, motivated by the study of cognitive biases in 2001 developed a process they called “adversarial collaboration” :

an approach to scientific debate [that] requires both parties to agree on empirical tests for resolving a dispute and to conduct these tests with the help of an arbiter.[1]

You might say this approach rejoins or re-bounds the infinite space of discord, by building adjudication into the process of work/expression, rather than letting it remain, as typical, an external and subsequent process. It follows from Kahneman & Tversky’s systematic studies of how any single mind, or voice, no matter how ennobled or intelligent or authoritative, is widely prey to common cognitive biases. The heroically individual Author, it turns out, is often astray; truth is woven in discourse.

I echo Kahneman et al’s paradoxical-sounding term “adversarial collaboration” with the term in this post, “collaborative argument”. My suggestion is similar to Kahneman’s, just applied to online discussion generally:

How might we design forums/argumentation to make credibility follow from easily-accessible and verified evidence of deep, good-will engagement with counter-argument and diverse views?

3 thoughts on “Collaborative Argumentation and Advocacy”