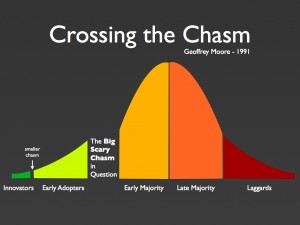 The journal PLOS Biology published a paper “An Introduction to Social Media for Scientists” by Holly M. Bik and Miriam C. Goldstein, on April 23. It has quickly become one of their most popular papers, with almost 25,000 views just over a week later.

In my comment submitted on the paper, which is copied in full below, I suggest this guide is oriented to the practices of current “early adopters” of these media, whereas we might anticipate that an increasing majority of future adopters:

“Crossing the Chasm” refer to the concept and book title by Geoffrey Moore, which explores the problem of how technology businesses can transition from serving “early adopter” customers to majority users. This is adapted from Everett Rogers’ “diffusion of innovation” model.

Bik & Goldstein, “So You Want to Communicate Science Online” diagram (2013)

how might we expand the view for casual, indirect, later-adopter users?
Posted by tmccormick on 03 May 2013 at 07:35 GMT

This is well-done and thorough survey of tools/practices in the (loosely defined) area of social media. I think it will be a great starting point for many scientists.

However, I’d suggest it tends to make certain assumptions that may narrow the set of use cases and audiences to which it speaks:

1) Focus on creation, not consumption, of social media.
2) Assumption that the scientist, not some intermediary like a publisher or institution, engages directly with the network.
3) Assumption that social-media activity happens on the commercial network, not embedded into scientists’ existing or preferred environments.

Below I will consider each of these points, and how we might imagine alternate/broader scenarios. My notes are largely adapted from my post of Jan 14, “How To Bring Academics to the Social-Media Party? Indirectly.” (https://tjm.org/2013/01/14/how-to-bring-academics-to-the-social-media-party-indirectly/).

1) Focus on creation, not consumption, of social media
Social media use may not be primarily or necessarily about creating, disseminating, or “engaging”. Although this may seem to contradict the notion of “social” media, in fact all online networks generally exhibit “participation inequality.” The “1% Rule” or “”90-9-1 Rule” (http://en.wikipedia.org/wiki/1%25_rule_%28Internet_culture%29) expresses this widely observed pattern that a small portion of users typically account for a large portion of all content creation.The authors seem to in places acknowledge this, e.g. noting that “strictly maintaining and organizing online accounts is an effective way to filter information.” On the other hand, they also say

Effective social media use requires engagement with the audience…New users must be open to engaging with people outside one’s own professional background or realm of scientific expertise.

I’d say this is overgeneralizing from the case of the most-engaged, typically early-adopting users, who perhaps DO engage broadly and deeply. It’s not technically necessary to use social media this way — e.g. you don’t even need an account to read Twitter streams. As wider populations engage with social media, it’s likely that increasing portions of them will be light to passive users. I think it is unnecessary, and possibly off-putting, to tell potential new users that they are required to engage, particularly with people of totally different backgrounds. You can be a strong, exploratory, efficient *reader*/user of these networks, I would emphasize.

.
2) Assumption the scientist, not some intermediary like a publisher or institution, engages directly with the network.

I’d ask, why in general would scientists have the skills, incentives, and responsibility to engage directly in this activity, any more than they would, say, by themselves run journal platforms or conferences or lab construction projects?

Perhaps significant parts of the social-media activity recommended by the authors, such as disseminating one’s research updates or curating a “learning network,” might often be better done by other parties. Such activities might be considered an aspect of “publishing”, for example, handled by current or future publishers; or they might be supported by the scientist’s home institution, or scholarly society, or some future type of 3rd-party service. The institutional case already occurs widely, with university and departmental social-media / communications staff working to disseminate research output to new channels.

.
3) Assumption that social-media activity happens on the commercial network, not embedded into scientists’ existing or preferred environments.

What’s starting to happen, and I think will happen much more, is that social-network activity and signals are migrating into the environments and tools native to scientists. For example, online versions of papers are starting may display Altmetrics data, and comment/sharing activity automatically gathered from social networks. Gateways can be established such that, for example, a scientist might receive and post Twitter messages/notifications via their usual email system.

Extrapolating that pattern very broadly and into the future, the way I’d propose to envision social-media is as a global, informational “nervous system” or “global brain” — fine-tuned, adaptive, connective tissues, efficiently linking whatever tools and practices scientists wish to use. This connective tissue will, I think, develop between systems, as opposed to being a new place that people must go to or “get on.” I think early adopters and advocates should think about how to expand social-media practices for the casual, later-adopting masses, rather than hoping they’ll have the same interest/engagement-level & practices as we do. Most of the citizens of our great future republic of social-mediated science haven’t, in truth, yet arrived from the old country.