Tim Volume 1 – a serio-farcical book concept about design and anti-design.

(with thanks to Steven M. Johnson, “whimsicalist, possibilist,” and inspiration).
originally from November, 2012.

Like many of my projects, this began as a joking suggestion.

Given my growing catalogue of lateral project ideas and other “news from nowhere,” one might ask: perhaps the list is the project?  I’ve been inspired in this, or let’s say given permission, by a long tradition of admired, useful fantasists and comic-literal provokers, such as Brian Eno and Peter Schmidt with their 1975 “Oblique Strategies” card deck, Claes Oldenberg’s great 1969 book Proposals for Monuments and Buildings, and Steven M. Johnson’s fantastical, social-critiquing inventions. 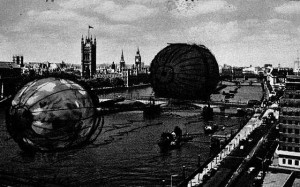 Proposal for floating monument on the Thames, by Claes Oldenburg.

Perhaps, then a book of semi-imaginary creations to cap my <cough> mostly imaginary fame and renown. Why not? After all, these days one can easily enough, and no doubt here need to, “self publish”. (that phrase which, I will remark, contains a usually unremarked paradox. Surely publishing is, in some philosophical sense, something other parties do, by granting you attention?).

However, as noted below, all of projects in my imaginary book proposal actually are in some state of implementation, development, discussion, published form, or funding application, etc. Like the hopeful say about long-suffering social network Google+, it’s a long strategy.

As with other forms of critical design, détournement, imaginary architecture, utopian proposal, startup version 1, etc., the purpose is not necessarily or entirely to “implement” literally what’s proposed. Or you could say, the aim is to be generative of unspecified and various implementations. Therefore they also may be a critique or boundary perspective on the idea of design as “problem-solving”: or as I’d suggest, they re-articulate the “problem-forming,” non-instrumental dimension of problem-solving.

But so much for the design theory, and on to design humor. As the old Borscht Belt joke said, don’t worry! some of my best jokes are Jewish.

—-
Your turn! any thoughts on the above, or got some new items, projects, or patterns to suggest? Let me know via comment box below, or email me: tmccormick at gmail dot com, or Twitter, etc.