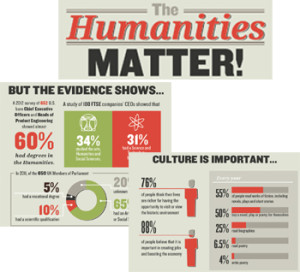 The 4Humanities collective (4Hum) recently released an infographic called “The Humanities Matter“. (PDF), created by a team led by Melissa Terras and the Digital Humanities group at University College London. It’s part of a wider Humanities Infographics initiative, for which additional statistics and funding are sought. The items in the infographic were taken from a crowdsourced list.

I have a few creative/critical responses:

3) Appendix:  response to specific statements on infographic – how persuasive?

Generally, I wonder if a quantitative infographic, particularly a single one, is necessarily exemplary of humanities ideas. It could seem like adopting a rhetorical mode from social science/marketing. Nonetheless I can see that it’s one approach, which may be quite effective in some contexts and to some people. Even better, I think, is for it to be part of a more open and ongoing dialogue, which in its own practice exemplifies values of exploration, expression, nuance, and non-reductive appreciation of complexity.

This touches on general themes of advocating versus exemplifying, telling versus showing. When we say “advocacy,” what’s usually meant is overt advocacy — which is one type of rhetorical mode. It may be effective in those contexts where people are prepared to consider an explicit argument; but that’s only certain contexts, perhaps mainly with comparatively sympathetic audiences. But there are many others.

This idea of extending the “The Humanities Matter” infographic into a series of some sort has been discussed online, both before and since I came to the topic.

@tmccormick @alanyliu @UCLDH good way to put it – but how to put that on an infographic, I wonder? Or perhaps that’s precisely the problem…

@alanyliu running a periodic submission, content, & award is minimal resources; result could just be PDF, for others to print locally.

@tmccormick: it's not a matter of 1 strategy vs another. Trying multiple strategies aimed at diff audiences w different attention spans

@4Hum Humanities Matters! graphic: how about an open series of other interpretations? as discussed https://t.co/5tq0qn7Yma #humsmat #dh2013

@tmccormick Absolutely. Want to organize it? I will make #dh2013 slides public; will contain info on new projects and those we need help w

@4Hum @tmccormick: recruit people outside our sphere to curate (a scientist, a businessperson, an administrator, etc.).

@tmccormick @4Hum: donations for #4Hum poster, buttons, other things we have made.

@alanyliu how about a self-sustaining project #HumsMatter to create graphics & merchandise in support of @4hum? w/online store, say.

@alanyliu @4hum to receive regular income, couldn’t #HumsMatter be set up as a regular (i.e. not not-for-profit) entity?

What I imagine, as perhaps a parallel or umbrella project to the Infographics Initiative, is a program of creating and curating graphic materials and merchandise, loosely around the theme of humanities advocacy.

Basically, I think it should be fun — engage widely and divergently, set up conditions for virality, and celebrate wit, wisdom, and the uncontainable. I imagine a HumsMeme meme & Lolz generator, with user-contributed stock of appropriate images and a caption adding tool; and video clips to caption. Of course, a CafePress-style store so anything can be printed onto any imaginable merchandise. I imagine contests for official conference t-shirts. I hear America and the world singing.

Interesting as such a project may be to me, I don’t know I’d even be able to work on it. I work mostly independently, by creating paying consulting work, business services, or product-development initiatives that may be “fundable” (as they say in Silicon Valley). If humanities and this project remain understood as something done within academia, by people who are compensated only by institutional position and attendant grant funding, then we’re probably not aligned and I wouldn’t be able to go any further with it myself. Unfortunately I can’t afford to invest much time in contexts without visible prospects of revenue, contract work, or job position.

Of course, in having to look so concretely to economic interest, I’m not so different from many people who are in academia. It’s a difficult situation for many, and for various reasons, I believe humanities academia and academics should be rethinking how their funding & compensation works. Traditional structures are strained or breaking down, whether it’s declining public funding for higher education in the US & UK, to defunding of or attacks on specific disciplines, to the mass casualization and precarity of higher-ed labor. While we can, we should, and I do decry these developments, we can also take them as challenges to examine the means of production, and envision new structures of sustenance .

For example, the idea that scholars normally are willing and free to distribute their work with no direct compensation should, I think, be evaluated against the economic context. Perhaps that notion stems from a “social contract” of scientific/scholarly work which is increasingly broken, or could be improved upon.

In the online discussions around the 4Hum graphic, I was struck by the comments about funding: UCLDH noted that the Infographic Initiative may proceed “funds allowing,” and Alan Liu said “we’re currently blocked by problems w funding flow, entity tax status.”  I imagine the entity tax status has to do with getting a registered charity / not-for-profit org set up to receive funds.

In the environment I’m in, it would be natural to ask, have we considered or tested a range of possible “business models”? Also, as I observed on twitter, finding a model for viability & sustainability might in itself be an interesting experiment/statement.

Given that context, I’d ask, is it necessary to receive funds via a charity/NFP entity? If that’s blocking development, can the project just establish/use a regular entity, as one might for any other private matter such as managing a property or running a consulting practice?

Also, I see that the current infographic is released with the Creative Commons CC-BY license, meaning that any reuse is allowed. From an entrepreneurial standpoint, I’d note that explicitly granting open rights for commercial use may make it difficult to develop revenue generation — for example, it might be easy for other parties to create merchandise using “HumMatters” materials, and remove the profit potential. Would requiring permission for that reuse really undermine the intended educational/advocacy purposes of the work?

While broad distribution of work, scholarly or otherwise, is desirable, “open access” is a moot point if there is no economic provision allowing the work to be created in the first place. In this situation, it seems we have a clear case where non-provision may occur.

Also, I would suggest that looking at new ways to find audiences and markets for work could be a productive form of intellectual engagement, for humanities scholars. If we believe there are publics who value what the humanities do, why not engage those publics and their support directly? It could be seen as just rolling your own publishing system rather than accepting/using the economic structures of e.g. commercial/society publishers and university presses.  Or do it with a press – start the University of California Press merchandizing division?

I don’t want universities or departments to be left to bake-sales for their funding, but I do think it’s valid and enterprising to think about how to make projects self-sustaining and economically viable.

Generalizing from this to scholarly work in general, we could ask, for example, how might we create “open access” models that not only don’t require article-processing charges, but provide compensation back to scholars who need it? There’s a lot of money in the system, but spectacularly ill-distributed when you consider global institutions and the hierarchy of academic labor.

3. Appendix: response to specific statements on infographic – how persuasive?

“The Humanities are academic disciplines that…”

This is an academic-sector, not universal view. I would say more inclusively that humanities are certain subjects and approaches centered on human nature, culture, and history, engaged in by many different groups in many ways well beyond academia. In the U.S., for example, the emblem of and perhaps many people’s first association with “humanities” is the National Endowment for the Humanities, which is not primarily academic, funding many public initiatives, libraries, museums, art programs, etc.

I’d say, this is aspirational, and how humanities academics may self-represent, but doubtful historically, and not obviously evidenced today. It’s at least a controversial claim for which some substantiation would be welcome.

Claims which may not be obviously humanities-specific:

“The Humanities teach us to deal critically and logically with subject, complex, imperfect, information….Being able to communicate effectively”

So do sciences, social sciences, and professional education, etc.

“It has been estimated that the economic importance of UK universities amounds to GBP 45bn”.

Is that figure particular to humanities?

“The value of the Humanities is more often in the questions posed than the answers found.”

A formulation to which, in my experience, other humanists may object. For advocacy in a solutions-oriented culture, I’d suggest it’s not necessarily well-advised to disclaim a part in answer-finding. Most people may say, well anyone can ask questions, we’ve all got plenty of them, so what? As the start of a possible variant, I’ve been thinking about an idea of “problem-forming,” defined as the exploratory and framing aspect of problem-solving or accomplishing.

For example, the “design thinking” methodology as articulated at the Stanford d.School’s includes the phases

The types of thinking and approach associated with the humanities naturally align with the Empathize, Define, Ideate aspects here — both logically, and in the actual practices of design-thinking exponents such as the d.School and IDEO, which are quite open to integrating humanistic ideas with engineering and business practices.

“Humanistic study is not formulaic.”

I hope not. No real study is formulaic, is it?

general accusations seem like straw men. I think it would be more effective and exemplary to point to key exponents of these claims being rebutted.

“Of 650 UK Members of Parliament, 65% had an Arts, Humanities or Social Science degree.”

I’m not sure what polled UK opinion of Parliament is, but in the U.S., Congress is one of the least respected institutions in the world, with around 10% approval rating. A preponderence of humanities degrees in the backgrounds of U.S. Congressman would probably be a negative argument to many U.S. audiences, and by association the claim about Parliament may be also.

“Over two thirds of Humanities and Social Sciences graduates enter the private sector, primarily the financial and business sectors… these represent some of the fastest growing areas within the economy.”

It seems unremarkable that 2/3 of graduates enter the private sector, since that is the primary sector of employment. Also, there is no necessary correlation between their humanities education and the sectors being fast growing; by definition, employment is found more often in the areas which are fast-growing.

HSS graduates only 1% more employed than mere high-school graduates? does not seem like a strong commendation — small return on 4+ years and $100Ks. Also, one might be more interested to know the rates for the depth of the recession or closer to present, since pre-recession peak figures might be comparatively favorable for HSS graduates.

how much do these have to do, or are perceived as having to do, with academic humanities?