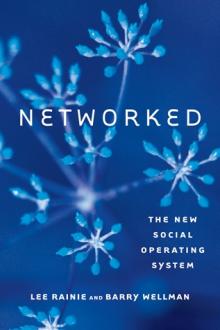 Networked (MIT Press, 2012) by Wellman & Rainie. [w/image of a tree structure, opposite of peer network]

I had an interesting, if heated exchange today with Barry Wellman, Professor of Sociology and director of NetLab at the University of Toronto, and co-author of Networked: The New Social Operating System (with Lee Rainie, Director of the Pew Internet and American Life Project), MIT Press, 2012.

I’ve had many exchanges with Wellman on Twitter over the last two years, discussing various points about social media, and I’ve regularly posted links to his papers and book. You can see that history here:  https://twitter.com/search/realtime?q=tmccormick%20barrywellman&src=typd.

Readers: Do you pay attention to or ignore endorsements on covers from better-known authors? Would one make you pick up a book? #publishing

@emilypohlweary I pay attention to them, altho I dehype when I read. 1/2

.@multisensorymel @emilypohlweary I just wrote a "fascinating" blurb for a guy I've never met, but I respect he and his book (from pdf)

.@emilypohlweary I admire you so much, that there's a 90% prob. that i would reccomend a book you write. (that's a Twitter blurb)

.@barrywellman “I admire you so much..90% prob. that I’d rec a book you write”: how reviewing is often not about the work in hand.

.@tmccormick you missed this entirely. 90% prob. means that every thing I've seen from @emilypohlweary is good so hi prob this will be too

I guess after decades of championing networked social intelligence, one has the right to cursorily dismiss & block conflicting views.

@tmccormick I blocked you for being offensive, and obtuse. Dont like twitter fights or false accusations. Sad you dont understand. Bye

“Blocking” is an action whereby a Twitter user A prevents some other specified user B from seeing his posts in that user’s regular twitter stream. It doesn’t prevent B from seeing the posts, as they can be viewed openly at A’s Twitter account page or from any other account. It isn’t needed to prevent A seeing B’s posts, as that is normally achieved by unfollowing or muting B.

Since I can no longer interact with Barry directly on Twitter, I wrote him a followup email as follows:

Dr Wellman,
I’m sorry to have engaged with you in this matter. I believe I was making a legitimate point, about extraneous peer/social factors in peer reviewing — which you probably know is a long-studied point in scholarly communication — but you seem to have interpreted as I “missed this entirely,” dismissed the point, and immediately and without notice blocked me. (see conversation at https://twitter.com/barrywellman/status/353995099950166018).For what it’s worth, I think your online responses, not only to me but to a number of other people as I’ve observed, are rather inappropriate and intolerant, and do little credit to you as a scholar or conversant or social media user, or to your institution or work.

Believe me, I am not the only person who has observed these issues in your Twitter exchanges. In this case, you appear to be responding with personal animus to a fairly neutral observation, made by someone with long background in scholarly communication & peer-review issues, and you just cut off conversation without notice.

Many people find Twitter blocking, at all, to be illiberal and dubious, as you are just putting hindrance in the way of one person’s access to public information.

You may not like someone’s tone, but does that equate to or justify a person with your power publicly calling someone else of little power or position “offensive”, and indirectly calling them a “jerk”? It’s veering close to libellous, let along unprofessional. I have many followers from throughout the academic & scholarly communication world, does it really serve you to make such attacks and cut off engagement?

I also was not impressed by the way you [recently] requested a “detailed proposal” from me on a project, which I spent time researching and writing, and then did not give any response. As someone who routinely does speculative proposal work, I recognize this as a pattern of not respecting others’ work/time, and it typically is a signal that an person/avenue is not worth pursuing. It’s ok though, ASA is just one of many possible societies for the project to work with, and we have other lines of approach with ASA.

All this may not matter to you much, as you are entrenched in great power of position and accumulated reputation. But I’m not impressed; I’m not in academia, although I know and work with many people who are in it at all levels, and I’m not particularly concerned with its status hierarchies. I have projects in many areas, and am glad not to be in the state of pervasive fear and hierarchy that I observe in so many academics.

I would also suggest to you that, in your position, you have the disadvantage of being immersed in networks which strain for your favor and approval, and avoid the risk of offending or conflicting with you — which is little help to your understanding. How many people do you know, who are knowledgeable about publishing and scholarly communication and social media, who would risk so openly disagreeing with you? A vanishing minority, I would wager. In my studies and projects, a recurring theme is how powerful are the homophily patterns in precisely the professions and fields which purport to pursue open inquiry.

Reputations change, also, and nobody’s is bulletproof; they’re sustained by how you behave. Speaking relatively from the margins, as I am, you see that most people will readily dismiss you regardless of what you say; and you remember who was open-minded and exemplary in conduct, from your point of view at least.

Well, now I’m starting to find this point interesting. Time for a blog post, perhaps! I don’t expect you’ll reply, but others will.

What are your thoughts? I’m listening. I’ve tried to present as complete and open a  record of all interactions between Wellman and me, in case anyone would like to judge of them. Let me know in comments here, on Twitter to @tmccormick, or by email.

One thought on “Are you reviewing the work, or your friends?”