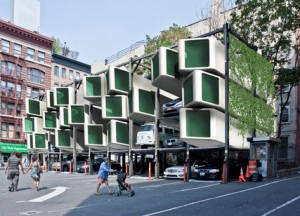 My explorations and writings about adapting urban parking spaces for housing were featured in a New York Times design article on October 19, 2012: “How Small Is Too Small?” by Allison Arieff.

“Most people see a parking space and promptly back up into it; Tim McCormick sees one and thinks, ‘I could live here.’

“Who would willingly choose to live in something with the footprint of a parking space (8x10x16 feet)? Millions already do, argues McCormick, a communications consultant: bedrooms, dorm rooms, motel rooms, hostels, mobile homes and the like. ‘I myself live comfortably in a converted one-car garage of 200 square feet,’ he says, “which allows me to live inexpensively near downtown in super-expensive Palo Alto.’

“In cities where space is at a mind-boggling premium, McCormick’s idea of taking up residence in a parking space — in what he refers to as a ‘Houselet’ — isn’t all that far-fetched. It may in fact be more appealing than the so-called ‘hacker hostels’ that got a lot of buzz earlier this summer. Essentially apartments that house herds of would-be startup entrepreneurs willing to pay market rate to live in near-migrant-worker conditions, hacker hostels are proliferating in cities like San Francisco and New York where work culture calls for 24/7 commitments and lots of food-truck takeout (which no doubt inspired upLIFT’s prefab parking pods for the city).

“’When you ask people to consider spaces smaller that what they’ve normalized to,’ says McCormick, ‘I think it tends to trigger elemental associations of constriction and claustrophobia. I think you have to find ways around all those acculturated and visceral reactions, and observe that we’re usually O.K. with that for certain times and purposes.’

“The Bay Area, suggests McCormick, could allow radical experimentation to occur ‘because we have the genius, the resources, the culture of innovation — and the need.’

“For now, that radical experimentation will have to wait for the likes of McCormick: The San Francisco Board of Supervisors has delayed its vote on decreased square footage until after the November election.”

One thought on “Featured in New York Times for Houselet ideas”