Ok, new in town, got apartment, car, job.  What next?  Local library card, of course.  So today I went to the downtown branch of the Palo Alto City Library, a short walk away from me on Hamilton St., and did my usual “mystery shopper” routine of wandering in, pretending to know nothing, and asking about services and how to get a card.  (have done this in a swathe of cities..).

The Palo Alto Downtown Library, as it’s usually known, is a delightful facility.  It opened in 1971, designed by William Busse, and was renovated and rededicated in 2011.  Originally, it featured the wrought-iron gates saved from the city’s original, 1905, Carnegie-funded public library that sat across the street, where the 1960s high-rise City Hall now stands.  According to Palo Alto Patch, the Carnegie building gates “proved too heavy and awkward for patrons, so they were removed.”  Ok, I understand, it may not have been so user- or kid- or elderly- or handicapped-friendly, but I kind of wish I could have the gravitas and historical experience of pulling open those doors when I went.

The present building I would describe as a subtle and effective melding of influences including Asian, Mission, and Californian Modern.  An East Asian aspect is suggested by the flowering trees and the enclosed garden spaces between the outer walls and the building proper, which have a meditative and considered quality in themselves, and also lend serenity to the glass-walled library interior spaces facing onto them.  The plastered and curved exterior sheltering wall suggests Mission, while the prominent horizontal wooden beams and the entraceway trellis speak more of California modern. 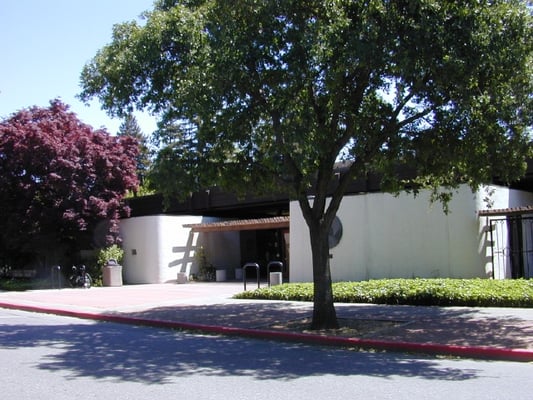 The comparatively blank outer walls at street line, curving in to the recessed and shaded entrace, to me articulate a sophisticated type of welcome to the visitor — receptive but not overt, the demeanor of the sort of person I would like to meet.  Considering buildings from the standpoint of how they talk to the street, I really like the Downtown Library’s refined manners.