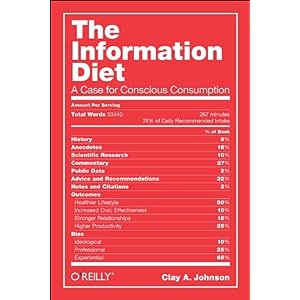 The Information Diet, by Clay Johnson, forthcoming January 2012 from O'Reilly.

One of the most interesting recent developments in media discussions is Clay Johnson’s work and forthcoming book on “The Information Diet.”

Overall, I think “information diet” is in interesting and powerful concept. Yes, let’s take charge of our lives, in this as in other ways, to innovate and design and choose.

However, before adoping this metaphor too deeply, I’d like to suggest a few objections to consider.

1) We’ve mostly learned not to simply “blame” the obese (or the poor, or disabled), recognizing that this often blames the victim, or doesn’t help. Let’s not “blame our habits” and forget that they are bound up with environment, inheritance, society, and technology.

2) In many areas, end-users don’t control their information intake in the way one can control eating. For example, at school or at work.

3) Food is quantifiable in most important ways, such as calories, fat / carb / protein content, nutrients, etc. Information, however, is not meaningfully quantifiable so, even though the mathematical theory of information misleads us to think so. Information does not, technically, necessarily contain any meaning; a higher-res version of a video doesn’t usually convey much more information or meaning to us. A striking anecdote or 10-word epigram may produce a huge cognitive effect, while watching a terabyte movie file may have little effect at all.

Even quantifying information by time spent is problematic, because much of the time we multitask and take in different sort s of information at once. If I write email while watching a Netflix movie for an hour, is that one or two hours of information consumption?

4) The effect of information upon people is not nearly so determinate as that of food. If someone eats a Big Mac, you can accurate predict the nutritional outcome, but if they watch a political ad or a read a short story, their reaction may be almost anything.

5) More generally, the term “information” is a recently arisen term with many implications that aren’t necessarily articulated when it’s used. For example it implies quantifiability; the equivalence of different media objects with the same number of bits (“equivalent to X times the Library of Congress..”); the “content” residing objectively in the information and not in the receiver or cultural context or the social act of communication, etc. What about just looking at the natural environment, or listening to our own thoughts?: this is not usually considered information intake, but surely it’s cognitively significant.

Unless one wants to uncritically or unconsciously follow these significant suppositions, it may be helpful to take any statements about “information diet” and consider them with “information” replaced with other terms such as “meaning”, “perception”, “media”, “knowledge,” or “communication.” Is it still true, or does the assertion not seem to fit as well?

What do you think, are these valid objections, do you have any others?

0 thoughts on ““The Information Diet”: five objections to the model”