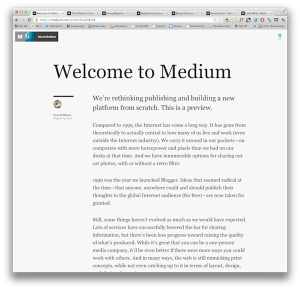 Recently I’ve been impressed by how well LiveFyre, for example, can now pull in distributed Web/twitter conversations and display on an article. It is connecting me to conversations around my posts which I would never otherwise have known about. See, for example, the 60+ comments on my recent post “What Urban Planning Hasn’t Learned From Tech.”

Commenting today may be often a mess. But another commenting world is possible.
Tim

I think I understand that assumption about open commenting, though I don’t share it. I had to argue recently in favour of open commenting on a shared project. My point was the cultural message being sent by its absence, as opposed to any great loss to the site through the absence of comments. It’s since had very high quality substantive comments and I’ve revised my earlier scepticism!

I’m quite taken with Disqus btw – thanks for suggesting it for sociologicalimagination.org. I’ll have a look at LiveFyre.

This is consistent with my experiences commenting across a wide variety of Web platforms:  I’ve frequently encountered delays, failures, and opacity (e.g. comment doesn’t appear, but it isn’t apparent why not, or what the process is). Because of this, I now routinely post any longer comments/responses in parallel on my own site, so they can be immediately online and the conversation not interrupted.

I think this experience helps to explain the widely-reported trend of local blog/Website commenting subsiding, and most discussion occurring on Twitter or other networks. Making any kind of comment is for most users a comparatively ‘expensive’ online activity, in time and effort, and site-specific commenting systems tend to increase the risk/cost by having registration requirements, opaque and varying policies/processes, imposing moderation delays or denials, and generally being not under the user’s control. Meanwhile, they may often lack benefits from user’s perspective such as connecting well to their existing discussion communities (e.g. on Twitter), being archived or deletable, etc.

Online conversation will migrate to the systems/environments that offer the best user experience, and most payoff for the effort, and increasingly that isn’t site-specific forums.

I think the #OpenComment model described could work. It’s basically an extension of what can currently be done with LiveFyre and Twitter, just adding the filtering component and possible addition of other social-media networks (e.g. G+, Tumblr, Pinterest?). For an example of LiveFyre-Twitter integration, see post http://bit.ly/techurbanism.

Now that I think of it, integrating multiple social networks is especially interesting, because it potentially creates interchange between the different demographics, geographies, user behaviors of different networks. It might introduce you to other networks where you find there is good discussion or activity around your interests, or you might find something preferable about how that network works. (more visual, more international, more local, more personal, more polite, less polite, etc..).

As noted in the comments on Techurbanism post — which was mainly talking about physical-world urbanism/building — such network-gathering and intersecting could itself be viewed as a good example of digital urbanism/placemaking.

Meanwhile, as Jonathan Raban wrote in “My own private metropolis” in 2008, revisiting his urbanist classic Soft City of 1974, many of the celebrated centers of *physical* urbanism and urbanist culture — London, New York, Paris, San Francisco, etc. — are, arguably, being drained of their urbanistic qualities of freedom, experimentation, and interchange. They are increasingly polarized, hollowed out (“Manhattanization”), surveilled, securitized, and inaccessible. He suggests that digital environments may increasingly offer the cosmopolitanism and open interchange that the physical life of the Metropolis increasingly doesn’t.

I think both dimensions are continually evolving and intertwining, and useful/interesting to work on mutually. The “tech urbanism” idea is for me a thought-space to consider current technology, digital/media culture, and urban traditions/forms as converged. Connected to many other discussions like “Smart Cities”, “Cyber Cities,” “informational cities,” soft urbanism, soft architecture, responsive architecture, etc. — but in part, my own private research theme..

13 thoughts on “Comment Systems as Urban Form: the #OpenComments model”