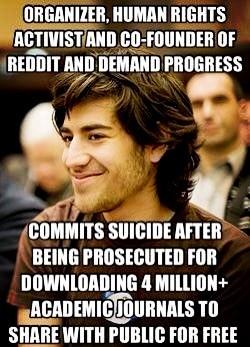 1. The revolutions will be complicated: Entwined Agendas in Open Access

The recent death of open-information activist Aaron Swartz has created a watershed moment for the Open Access movement. At the same time, it reveals a wide range of public views on what “opening” scholarly literature might mean.

Reform movements may have a variety of factions, in competition and confusion, with various and entwined agendas. This observation does not necessarily imply any criticism: it’s just acknowledging the complexity of how people and movement operate. It’s Kant’s “Out of the crooked timber of humanity, no straight thing was ever made.”

In this post, I’ll examine how the Aaron Swartz case created a sense of unity and moment around Open Access in scholarly publishing, but also showed  people may associate a remarkable range of positions with Open Access: from the most radical cyber-anarchism, to its recuperation into an agent to reinforce traditional disciplines.

In some ways Open Access is the type of term which demonstrates Nietzsche’s observation, “All concepts in which an entire process is concentrated defy definition; only something which has no history can be defined.” (“On the Genealogy of Morality” 1887).

2. Stand Up and Be Counted: the #PDFtribute Protest

Micah Allen, a Danish neuroscience PhD student who proposed the Twitter pos PDFtribute idea on ___ apparently independently of Jessica & Viva, who came up with the hashtag that then took off.

Tweet at all of the academics you know to put their PDFs online in tribute to @aaronsw. Use the hashtag #pdftribute.

One thread of response has been to explore radically challenging the paywall publishing system by This was an available interpretation of the #pdftribute postings — that the posted links were an invitation to civil disobedience, a sort of Jubilee to free scholarly literature from its paywall-bondage.

3. By Any Means Necessary: JSTOR Liberator and Papester

This view was illustrated by the “Aaron Swartz Memorial JSTOR Liberator” tool from Archiveteam, “a loose collective of rogue archivists, programmers, writers and loudmouths dedicated to saving our digital heritage.” 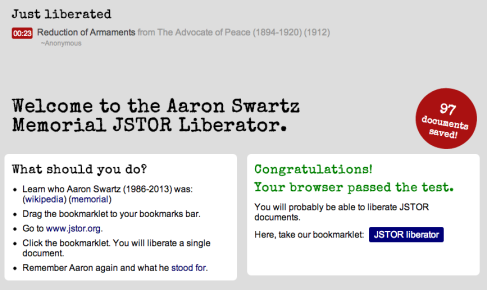 Michah Allen suggested a “Papester” (as in Napster for papers) system to extend JSTOR Liberator into a global BitTorrent library, potentially making all now-paywalled content available to anybody for free:

“Could a papester button irreversibly break down the research paywall?” (originally: “Can papster do for academic publishing what napster did for the music industry?”), January 15. @neuroconscience

A particularly interesting, and quite different response in the Aaron Swartz / Open Access discussion came from Dan Cohen, history professor and the director of the Roy Rosenzweig Center for History and New Media at George Mason University. I greatly respect the work of Cohen and the Rosenzweig Center in creating ground-breaking new tools, projects, practices, and scholarship.

A piece by Cohen ran in Wired on Jan 15, titled “To Make Open Access Work, We Need to Do More Than Liberate Journal Articles.” On one level, this a sensible enough idea. Judges presumably can, in cases, more holistically evaluate work than metrics can, for example if the work is in multiple or new formats, or collaborative, or ongoing. Cohen’s article offers a reconciliatory thread to the discussion, by focusing on the human motivations of academics who might or might not choose Open Access paths. Finally, the suggested action is implementable and non-disruptive — after all, anyone can give out awards for any reason they like, and  tenure/promotion/grant committees are free to take any such awards into consideration.

However, there are some puzzling layers to this recommendation. First, while the Wired piece is presented as an argument for Open Access, related to the Aaron Swartz case, it is a close adaptation of an earlier post on Cohen’s blog — “The Other Academy Awards,” from January 11, the day of Swartz’s death — that makes no reference to Open Access issues. In that article, Cohen argues that since new work in the humanities may often now be online project, it has to be evaluated after “publishing” rather than before as in the traditional peer-review case. This is referred to generally as “post-publication review”, and is advocated in other contexts for various reasons such as allowing work to be published faster and cheaper, and democratizing evaluation. (e.g. the PLOS ONE model).

However, Cohen argues, journal editors in the humanities are often so  traditional as to not accept or even understand post-publication review, particularly “controversial forms of post-publication peer review such as open review or crowdsourcing.”  On the other hand, awards are a understood, existing practice that people can more likely accept. Fair enough.

On closer inspection, the mechanism which Cohen focuses on, awards, is not so much a means to achieve Open Access, but a means to ensure establishment/disciplinary validation of new, born-online forms of work (i.e. in Digital Humanities).

I do find Digital Humanities new-form often projects interesting and innovative, and see they might need space to take root and not be choked off by older scholarly practices. (much like the need for corporate innovation “skunkworks” to be allowed freedom from standard procedures in budgeting, project approval, etc.). On the other hand the Wired article, I’d suggest, reveals a significantly ambivalent and recuperative stance regarding the Open Access revolution — showing how Open Access can partly threaten and partly merge into existing scholarly practices. 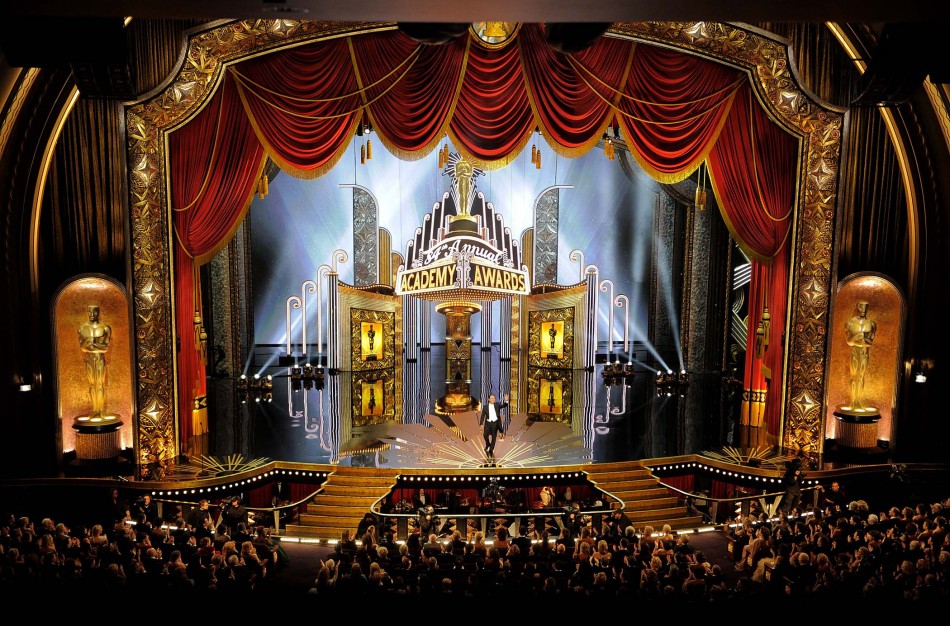 Imagine a single hub at which one could easily a) submit any materials to an Open Access repository, b) request items not yet available, c) resolve requests, i.e. send automatically check whether there is an available resource for a given DOI or ISBN etc.

I’ve set up Twitter handle OARReR as a tracker & reference point for this concept.

A universal repository could harvest/index from other repositories. Also, it could provide a streamlined way to submit a preprint, summary or other best-available version of an article or book or other work, and associate this with the “version of record” identifier — e.g. Digital Object Identifier DOI, or ISBN.

Building on the #PDFtribute activity, we might think how to build to simplest and most universally-accessible repository interfaces possible. I.e. submit just by tweeting, or emailing, or using a single simple Web form.

A Web forms or tool could provide useful augmentation services to make Tweeting easier and better. For example,

This could provide a tool for anyone who doesn’t use Twitter themselves, or who’d like to do a paper submit in a more structured way. They might do that in order to maximize their dissemination e.g. by using best hashtags, or to get the DOI / identifier, or perhaps it has some other benefit like automatically getting featured in “new” queue on PDFtribute.

Of course, this form might also just let you deposit a doc into the repository with a file upload. But making it a tweet-generator both integrates it into social media, and in effect creates a robust API for the service. Just serve the right data into the Twitter stream, from whatever tool you want, and the service picks it up and processes it.

On the presentation / dissemination side, I can imagine a site area showing the disciplinary and other tags, and number of items, so you could select a hashtag (or multiple) and see all, or most recent, or most-viewed items with that tag(s). Any tag might have an associated Twitter account, so any item given that tag automatically gets posted to that account.

In a way this is like a whole micro-publishing system, based on simple elements. With a check-in, metadata control, identifier assignment, dissemination, metrics (tracks what gets rt-ed etc.) it actually might do automatically many of the things we think of “publishers” doing. Or wish they’d do..

By tweeting a URL (or other resource like data set) the submittor is actually doing an repository submission, in a very lightweight way. That is, they’re marking the referenced item for harvesting, assuming the URL is valid.

There’s something powerful about this, I think — “submitting” seems heavy, a private and possibly tedious task; but on the other hand, tweet or email a URL with a hashtag and this series of things happen by themselves. You work get harvested into a stable, global repository, your pledge is recorded, there may be a certification / timestamp / identifier-assignment, you join a community of pledgers, you get “published” in the sense of disseminating to followers of the relevant topic hashtags, etc.

Conclusion:
Perhaps simple tools, deployed pervasively, can build a  path towards a global Open Access library of best-available versions of any paper or book (whether actual OA version, preprint, or summary & comments page). 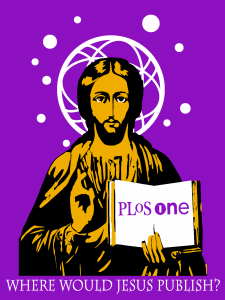 2 thoughts on “Open Access: Revolutionary Disagreements and the Global Library”