You might say that Korean pop-star PSY’s “Gangnam Style” has become the world’s leading cross-cultural sharing and remix platform:  a #1 hit in over 30 countries, the most watched and liked video in YouTube history, and hailed by UN Secretary-General Ban Ki-Moon, with that notoriously uncertain Korean irony level, as a “force for world peace.” Along with the dramatic ascent of Korean tech superpower Samsung to the position of world’s leading mobile-phone maker, Gangnam indelibly marks the emergence of Korean global soft-power greatness. Worldwide, cultural and protest groups of every stripe hasten to symbolically perform on the stage set by PSY, by creating their own versions and parodies. 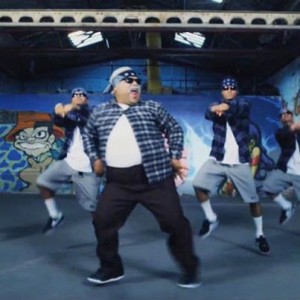 Just to keep the cultural roulette going, I’m going to throw in with Mexican L.A.-based entertainer Don Cheto’s “Ganga Style” version, a witty and expertly-executed, veritable encyclopedia of cultural commentary as refracted through the glorious chaos of Los Angeles. 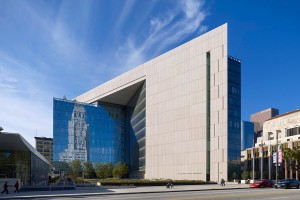 Don Cheto’s creative team shows admirable appreciation for L.A.’s urban landscape, in setting the various scenes of the video, and in particularly it’s heartening to see the monumental new LAPD headquarters so well-integrated into the cultural conversation, if not quite in the manner the builders may have intended. This $500M project strove mightily to incorporate community-building gestures, such as a public auditorium, restaurant, and park, and truly, efforts were good all around.

However, this is the fractured “City of Quartz”, as brilliantly described in cultural critic Mike Davis’s 1990 cultural history of the same name — which the Boston Review summarized as showing L.A. to be a “Postmodern Piranesi…and prisoner factory.” So the LAPD headquarters inevitably takes up arms in the L.A. sea of symbolic troubles, being dropped into an urban context facing the rearing dystopian reptile that is the Caltrans District 7 Headquarters Building across the street (designed by Thom Mayne / Morphosis) and down the block from the dueling great ziggurats of LA power, City Hall and Times Building. The swooping rooftop doubles as helicopter landing pad, somehow reminding one of the U.S. embassy in Saigon being evacuated or perhaps the slum-ringed high modernism of Brasilia. 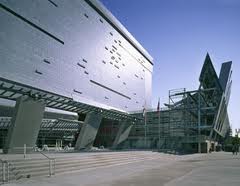 The LA Times‘ architecture critic Christopher Hawthorne had no difficulty enlisting LAPD Headquarters in the recent and permanent unpleasantness, observing (with, again, uncertain irony level) that the building facade’s effort at playfully irregular window arrangement “was meant to thwart snipers hiding inside the offices of this very newspaper.”  In LA, as journalist Chris Hedges’ 2002 book title put it, War Is a Force That Gives Us Meaning. Or to loosely paraphrase Clausewitz, culture is a continuation of war by other means.

But really, the war-zone condition is paradoxically a key source of Los Angeles’ iconic, critical power, as Mike Davis observed. Perched precariously on a Pacific Plate edge fault-zone, luxuriating in catastrophic potential from drought, wildfire, and urban insurgency: without question a key part of Los Angeles’ brand is crisis. Don Cheto choreographs the paradoxes with infinite panache, performing the role of hapless, downtrodden Mexican in the brutal El Norte, while in fact living large as a millionaire entertainment mogul, overseeing what is clearly a large-budget and sophisticated production machine to produce and promote his latest video.

For me, Don Cheto’s dystopian “Ganga Style” shows LA at its best: expertly crystallizing cultural influences into a stylish travesty, continually reclaiming itself as a vibrant stage and focal point for global cultural war, this time joining with the new contender from Seoul. Everyone can be part of this creative war.