houses by students at Emily Carr University, Vancouver BC

Many cities such as San Francisco face a multi-dimensional housing crisis, with large portions of the population heavily burdened or priced out of ownership by housing costs, unable to find appropriate housing, or facing onerous transporation expense and stress.

However, while urban housing is highly controlled, expensive, and inaccessible, large areas of adjacent, valuable public space is given away for uncontrolled, free parking.  As has been argued most influentially by Donald Shoup in The High Cost of Free Parking. (2005), this practice amounts to an extraordinary privileging of private automobile use over other goals such as housing affordability, pedestrian / bicycle / transit use, street-level livability, or environmental sustainability.

A parklet on Valencia Street in San Francisco.

However, why not take this idea to the logical conclusion and put actual housing units on parking spaces?

New York, San Francisco, and other cities are already reallocating scarce parking spaces for parklets and benches, so why not try using these spaces for something potentially far more valuable: compact mobile housing units?

Naturally, in the U.S. most people would immediately ask, who would ever choose to live in units with a footprint of a parking space, 8 feet x 10-16 feet?

First, millions of Americans, and billions of non-Americans, already do live in such spaces: they’re called bedrooms, dorm-rooms, hotel rooms, hostels, mobile homes, etc. I myself live comfortably in a converted 1-car garage of 200 square feet, which allows me to live inexpensively near downtown in super-expensive Palo Alto.

Secondly, generations of tinkerers and homesteaders have been building and living in tiny houses in back yards, and on vacation properties since, forever. In the last 10-15 years, this has exploded into an international high-design lifestyle movement, and now a steady sub-genre of architecture book publishing.

Often, tiny house concepts overlap with mobile and modular design, for example in the thriving architectural sub-field of shipping-container-based housing.

A much-reported case of housing specifically built on a “parking space” is the Fuyuhito Moriya’s house in Tokyo, built on a 30 square meter area formerly used for a parking space.

Getting us closer to mass production and mobility would be SnoozeBox, the UK-based company that offers popup hotels assembled from room units made of converted shipping containers. In their case, 40-foot containers (2 TEU, in shipping-industry parlance) are used, each containing multiple rooms.

Nobody in the U.S. would live in a housing space on top of a parking space?  Who knows, why not try it? Presently, paternalistic housing regulations mandate, for Americans, minimum living spaces that would be considered luxuriously expansive to much of the world’s population. Meanwhile increasing portions of the population, particularly the young, face prohibitive obstacles to renting or owning property, particularly in the concentrated urban areas where most job growth and career advancement is available.

Personally, I think that a highly affordable cabin located in a vibrant part of a central city, which I can relocate or put into storage as needed, seems radically unconstrictive compared to being trapped in a rental costs of 50% of my income, or in a 30-year mortgage, or worse, stuck with underwater property after a housing market collapse.

Already in New York and San Francisco, traditional housing-space requirements are being challenged by officials, developers, and housing advocates as obstacles to supply and affordability.

A Call for Entries and Occupants

San Francisco is a capital of both lifestyle experimentation and housing unaffordability, so let’s work with what we’ve got and try a radical experiment:

give or rent parking spaces out to homesteaders willing to design, build, and live in Parking Houses.

Taking a cue from agile software development, we might call this approach “agile housing”: build small, fast, and flexibly, don’t try to discover and fulfill every possible requirement at the outset. Decades of experience and studies in software engineering have shown that iterative, adaptive development is often more effective, or even the only possible approach under conditions of high-uncertainty mission or environment.

Analogously, why should we build only with fixed forms? Building for fixedness, like trying to completely specify complex software systems at the outset, creates high costs and risks or failure or underperformance.

Applying this observation to cities is as old as software development, as it happens. In particular, two 1960s radical architecture movements, Archigram in the UK and Metabolism in Japan, envisioned and theorized (and occasionally built) a city environment in which many or all components would be movable, adaptable to changing needs. Visionary architects have been rediscovering and extending these ideas ever since:  for example, Andrew Maynard’s Corb 2.0 housing system, which uses standard industrial container-handling equipment to make a reconfigurable block.

Addendum:  see also my followup post “Parking Houses and Houselets: Critical Followups” in which I respond to a set of questions from Allison Arieff of SPUR / NYTimes.

thanks to Romy Ilano for ideas, pointers, and conversations about rethinking health and urban space.

After I announced the publication of the book I co-edited, Rebooting the Academy, a number of people asked how to get the free sample chapter, or get the sample or whole book if you don’t have a Kindle or other e-reader device.

To do so, go to the book’s page on Amazon, and look for these boxes on the right-hand side of the page:

In the lower box, click on the link “Kindle Reading Apps“, then follow instructions to download a Kindle application for the device or computer you wish to use, e.g. Windows or Mac computer.

Once you have installed that application, return to the book page, and now you can either click on the “Send Sample Now” for the free chapter (in upper box shown at left), or “Buy Now” to immediately download the complete book for $4.99.

Two words: Total. Magic. In theory, you could, on-the-fly: buy, download, and read the book from the North Pole, or while cruising at 30,000 ft, or even from right inside a bookstore when you realize that getting this e-book will be a delightful, economical, burden-free alternative to that unwieldy, $21.95 tree-book you’re currently hefting in your other hand. Free your mind, and free up your storage unit(s)! Take it from one who knows!

Also, thanks for all the nice feedback on and interest in this project. I am encouraged by this to explore further book ideas. Of making many ebooks there will be no end. 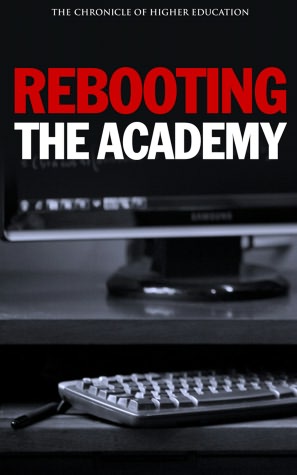 The book I co-edited with Jeff Young, Technology Editor of The Chronicle of Higher Education, is now out from the Chronicle. It includes the profiles from the original Chronicle special feature, “Rebooting the Academy: 12 Tech Innovators Who Are Transforming Campuses,” plus essays by each contributor, and an introduction by Jeff.

This was an exciting project, at what is clearly a watershed moment of change in higher education. Aside from profiling and celebrating a group of extraordinary education-tech innovators, we were also exploring the new possibilities of book publishing today, when the doors are wide open for new parties to assemble and publish books, and in some ways the notion of “book” is open for reinvention.

Rebooting is available for $4.99 in multiple outlets & formats, and a free sample (includes the introductory essay) is available:

Thanks, Jeff and the Chronicle, it was great working together on this. Full table of contents is below.

Rebooting the Academy 12 Tech Innovators Who Are Transforming Campuses

12: John P. Wilkin, U. of Michigan
Profile: Grounding Tomorrow’s Digital Library in Traditional Values
Essay: The Past, Present, and Future of the HathiTrust Digital Library

Acknowledgements
About the Editors