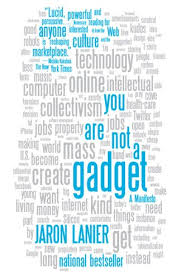 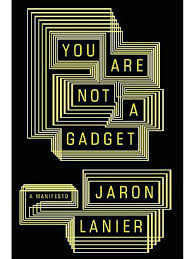 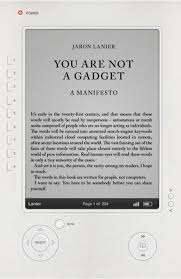 I admire this cover design (above left) for Jaron Lanier’s You Are Not a Gadget, Vintage paperback edition 2011.  It uses the familiar “tag cloud” design to convey author, title, promo blurb (in blue) and subject matter (grey).  Has someone else done this for a book cover?  It seems almost obvious, in retrospect, since we see tag clouds all the time;  yet here it seems fresh, clever, and effective.  It’s a common observation about well-designed things, I think — that they’re obvious (and obviously good), but only in retrospect.  The “why didn’t I think of that” phenomenon.

I also like the cover (above center) of the “Hard-Cover – Text Only” edition (whatever that is).   It cleverly invokes the visual language of circuitry and of digital pushbuttons, i.e.  the visual methods of signifying depth on a flat screen, by outlining, shadowing, etc.

Not to mention, the UK hardcover cover (above right): which has popped up on many designs sites online.  The whole cover is a real-size reproduction of a Kindle-like e-book reader, with the opening  paragraph of the book showing.

Amazon has an interesting interview with Lanier, on the book page:

“Question: In You Are Not a Gadget, you argue that idea that the collective is smarter than the individual is wrong. Why is this?

“There are some cases where a group of people can do a better job of solving certain kinds of problems than individuals. One example is setting a price in a marketplace. [….] There are other cases that involve creativity and imagination. A crowd process generally fails in these cases. The phrase “Design by Committee” is treated as derogatory for good reason. That is why a collective of programmers can copy UNIX [to make Linux] but cannot invent the iPhone.

“In the book, I go into considerably more detail about the differences between the two types of problem solving. Creativity requires periodic, temporary “encapsulation” as opposed to the kind of constant global openness suggested by the slogan “information wants to be free.” Biological cells have walls, academics employ temporary secrecy before they publish, and real authors with real voices might want to polish a text before releasing it. In all these cases, encapsulation is what allows for the possibility of testing and feedback that enables a quest for excellence. To be constantly diffused in a global mush is to embrace mundanity.”